Since its inception in 1998, the Cherry Hill Sculpture Project's sole purpose has been to raise funds to produce the first piece of public art in Cherry Hill Township. After receiving grants from the Camden County Cultural and Heritage Commission and the Gannett Foundation, as well as corporate and private donations, the Committee has raised enough funds for the first piece of art to be commissioned and displayed at the Cherry Hill Arts Center at Historic Croft Farm.

Artist Statement - Beginning with the simplicity of a line or curve, I explore shape and movement in my sculpture. It is the physicality of projection that drives me to a finished work. I've recently been dealing with the human form, loosely basing work on my own interpretation of the emotions inherent in bodily statement. Taking these simple likes, I work, carving or cutting, until something arises from nothing. Each sculpture describes, in a deliberate way, a general feeling that may be overlooked when the human body is viewed as a detailed form. I typically roll with the material in which I am working, which is primarily glass and metal, and allow it to influence the spontaneity of the piece while not interrupting its sensitivity.

My work has always been somewhat minimalistic, constantly repeating lines or forms. In turning towards the figure, I've always allowed myself to investigate the complexities of human interaction and solitude. Most of these pieces represent solitary human forms whose posture and emotional content are none less suggestive of relationship and human interconnectedness. Maintaining a simple vocabulary, I translate these intricate relationships into something fundamentally understandable, in hopes of creating a visceral link between the sculpted figure and its audience. 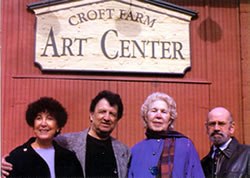